December Is a Blur

I usually try to recap my year and celebrate with reports of quilts and art I have made. This year December seems like a bad dream.  On December 1 my precious cat Tarbaby bit my L index finger when I picked up a bag of crackers he mistook for his treats, and I developed a terrible infection with severe pain, doctor visits, antibiotics, until I was hospitalized for surgery to clean out the wound. IV antibiotics will continue for several weeks at home and I am hopeful of regaining flexibility in the finger. So quilting has come to a screeching halt.


The IVs take two hours at 8 a.m. and 8 p.m. Luckily I can move about with the yellow ball in a zipper purse on a lanyard around my neck. No IV pole! The medicine is in a yellow ball in a pouch. Here's a full ball and an empty one. I learned how to get these started on my own. I've binge watched lots of Cary Grant movies on the Turner Classic Movie channel.

My tree was a shaped Rosemary plant which I will set out in the flowerbed to replace the overgrown bush I had cut down. It has a delightful scent that I really enjoy.

Oh, yes. . . I turned 83 today! (I see it is past midnight, so it was yesterday.) I am looking forward to a healthy, accident-free year of quilting and art in 2019. There's a quilt just waiting for binding.

Son Mark came for a pre-Thanksgiving visit. He gets so much done when he is here. An unexpected achievement was making friends with Tarbaby--which is HUGE if you know Tarbaby!--tying up the wisteria bush, petting Elizabeth, planting pansies, power washing the flowerbed stones, getting my TV/DVD remotes sorted, getting my blog to accept comments, getting my computer information and passwords into a safe storage instead of on bright pink pages beside the computer, getting PBQ stuff to storage unit, dealing with frozen Kindle Fire PaperWhite, canceling Norton that I was paying for but not using. All this along with giving Elizabeth lots of demanded attention. I wish I could have photographed all the little tasks and problems he solved for me. He even helped Linda and me get two quilts layered and ready for quilting. 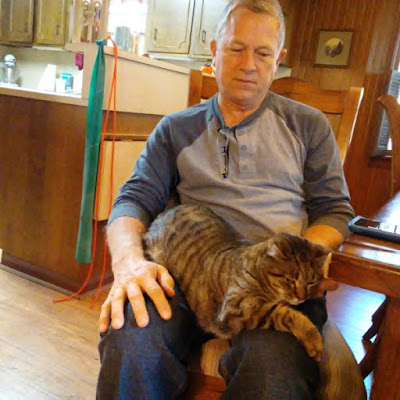 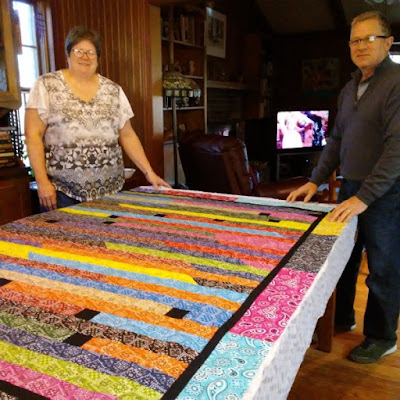 For many years my family celebrated Thanksgiving at my brother's home in Austin. Roy and I would drive from Mississippi through East Texas and pick up our parents to go on to Austin. Terry Weeks and his wife Kay still host and invite any family and friends who can come. It is a great time to get to see my nephews and nieces and other friends who love to go to Terry's. Such happy memories and so much to be thankful for!
Posted by Martha Ginn at 1:55 PM 5 comments:

I'm loving this 60-degree sunny weather! It follows two nights of freezing temperatures when I covered a few treasured plants--Crotons and Geranium and Blue Daze. The leggy tomato plants that are still producing green stems and leaves I did not even think about. To my surprise, today I am seeing buds and one tiny tomato. Not getting my hopes up after an entire summer without any tomatoes.

There is beauty in a dead limb with curly lichens that I hope to use in an arrangement with holly berries and nandina berries. Decorating is quite simple for me and the cats. 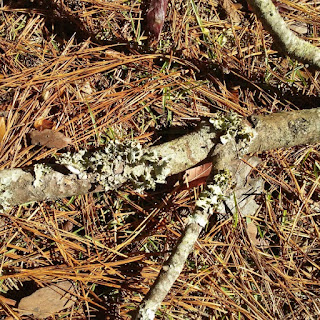 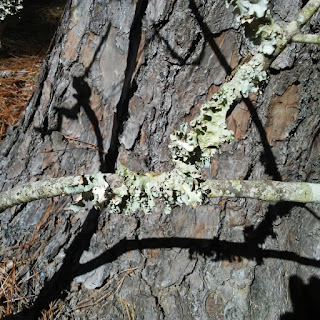 Daughter Linda made me a beautiful table runner that I will enjoy. This fall I will alternate adding the pilgrim dolls and the pumpkin made by Susan Carlson's mom, Oma, from my trip to Maine in October of 2017. The variety of colors in the table runner make it adaptable for all seasons. 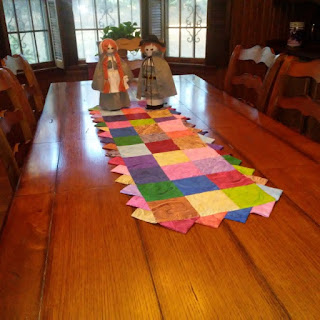 Linda has become an avid quilter, and I asked her do one of the lectures at the show. Her title was "It's never too late to start, or, blame it on the barn quilts." Her interest was finally captured when she began researching barn quilt signs she wanted to make for her front porch. This led from painting to actually sewing, and she has become quite proficient at it, even entering two quilts in the show--quite admirable for a less-than-two-year quilter.

Another lecture was presented by Leanne Green and her mother Polly Thomasson. They told of the joy of sharing the making of quilts over many years. As they gathered quilts from their closets and walls, they relived precious times of planning and making these quilts that their families treasure. As a thank-you for asking them to tell their story, they gave me this exquisite string fabric bowl. Leanne is demonstrating the making of these bowls to the Southern Fiber Artists group at their November 2018 and February 2019 meetings. My bowl is about 15" in diameter and 6" high/deep. It is embellished with seed beads and bugle beads around the outside trim. How I will treasure this unique gift! Most people complain when asked to do a job; I have never been thanked in such a beautiful way for asking someone to help! This is an example of how people share their time and talents with a willing spirit to make a successful event like our quilt show happen. 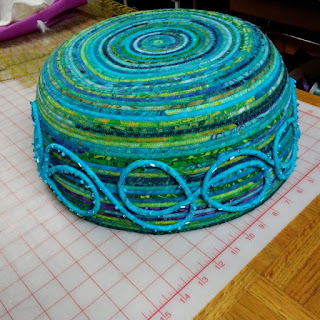 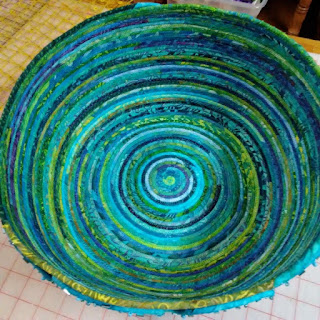 Coming home from Arrowmont brought a little unexpected excitement when someone picked up my red bag (containing Elizabeth My Almost Perfect Cat quilt!) instead of his red bag at the Jackson airport. It took several hours to locate the person, and I had to drive on home to Hattiesburg without my quilt and all my class exercises and the week's worth of clothes. Everything was delivered safely to me the next afternoon. 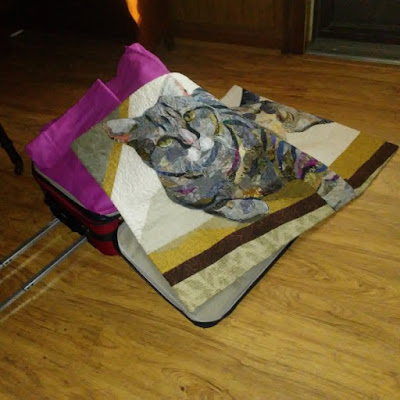 Working on some of Paula Kovarik's stitching exercises has been fun, even with my trusty Pfaff giving me technical problems. After a week of stitching black thread on white and white thread on black, I thought I would try a stripe background. 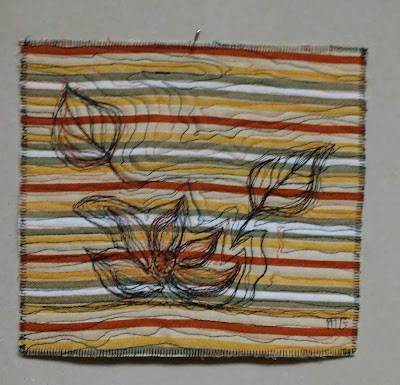 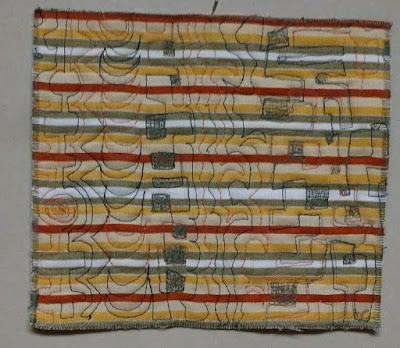 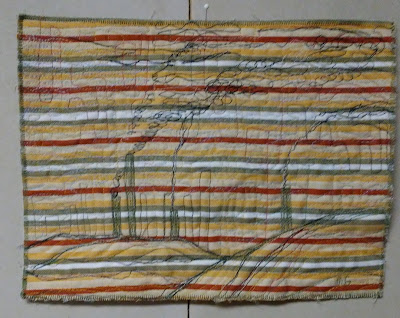 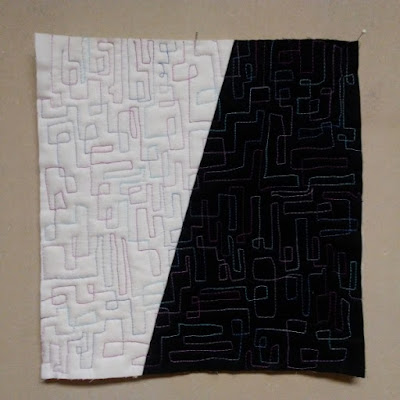 My talented friends in the University of Southern Mississippi's symphony orchestra amaze me with their performances. Last night's program was entitled Viva Mexico and featured works with a decidedly Latin beat. 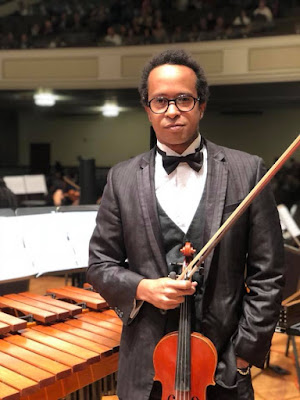 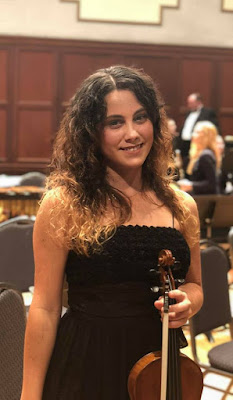 A week earlier for Halloween they dressed up as Little Red Riding Hood and the Big Bad Wolf! They are such a pleasure to have come to our University Baptist Church suppers for our home-cooked meals. 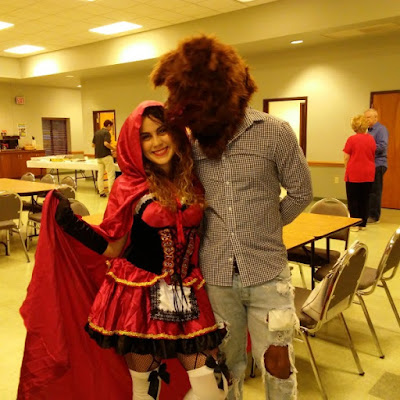 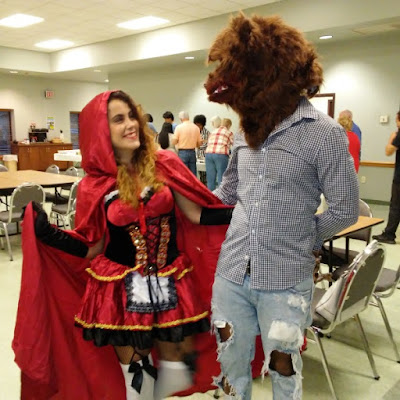 Posted by Martha Ginn at 8:48 PM No comments:

I have admired Paula Kovarik's quilting and stitching for several years, and when I saw that she was teaching a week-long class at Arrowmont, I made my plans to be there. It involved driving to Jackson, flying to Knoxville, and an expensive taxi ride from the airport to Gatlinburg, Luckily, sewing machines were furnished although having one's own is preferable. The large classroom gave the 14 students plenty of work space and room for discussions and sharing around a table. Paula gave us exercises and instructions, and we tacked our pieces on the walls so we could see each student's work and follow progress.
The emphasis was on LINE--the properties of a line, what it can do, how it can lead the eye around an artwork, how it can tell a story. To capitalize on this, we worked primarily in black and white-- white thread on black, and black thread on white, as well as a variegated black-to-white thread, which resulted in unusual pieces. We did some group work such as drawing a line on paper and then moving to each station to react to the last line placed there. We also used a line to react to a word prompt, adding to each other's line. One exercise was called "slow build," meaning to start with a line and react to it over and over to slowly build the composition.
We came home with lots of exercises and sample stitches.  I like the slogan that "Product is for the ego; Process is for the soul."


The week was instructional and inspirational. An unexpected plus was meeting and forming strong friendships with several people. I was one of the few first-timers; most had been to classes several times, taking a variety of classes. I highly recommend this school for learning and an all-around good time!
Posted by Martha Ginn at 5:41 PM No comments:

As if enjoying crisp fall weather were not enough, I got to do it last week in Gatlinburg, Tennessee, at the edge of the Great Smoky Mountains. This school is carved out of a mountainside with scenic, steep walkways joining the campus of housing, classrooms, dining hall, galleries, and offices. The town is filled with tourist shopping, amusements, dining, and a skylift that went above my cottage for a view of the area.
The Gatlinburg fire two years ago destroyed the Dormitory and woods behind it. A new 4-story dormitory has been built on the site of the destroyed one.
Enlarge any picture to see how steep some of the paths were.


More about Arrowmont--The Class in next post.
Posted by Martha Ginn at 11:13 PM No comments: