My caterpillars emerged from their chrysalises after nine days. The first one was out one morning when I awoke. I had taken a little sewing trip to my friend Jackie Watkins' home on Lake Caroline north of Jackson, and the jar of parsley and two chrysalises went with me. Thinking the second one was about ready, I positioned the jar on my dash so I would not miss anything on the two-hour drive back to Hattiesburg. (My kids will probably freak out when they read this, but I swear I was careful and safe!) I took the first hatchling out of the jar and put him on the dash, where he stayed for the ride. When I got back to Hattiesburg I put him on some parsley in my flowerbed so he would know where his home was.

The second one began to emerge about Collins (30 miles from home) and it was such a fun scene that I found a place to pull over and watch and take a few good pictures. He was also placed in my flowerbed. Both butterflies stayed a couple of hours before flying, and it was quite a happy sight when I saw one of them the following day on my Lantana flowers.

I put the binding on this Leftover Triangles piece, did a ghost quilting project, and planned another Interleave design using black, red, black print, and green/red/gold print with composers' names on it. I think this will be called Interleave Symphony. It is wider and taller than any previous pieces I have made and I thought I would have to give up when the first few rows were so difficult to handle under the machine head. After several rows it became more manageable. I think I am going to like it. Elizabeth approves after close inspection.

The dog puzzle is still under construction, and I often find Elizabeth sitting or sleeping on it, waiting for me to come and work. Three friends came one afternoon to help, and she enjoyed the added attention so much that she finally just insisted on laying down on it to be admired. I would try to pick her up, but her swishing tail could fling pieces everywhere. We gave up and left her, so she quickly became tired of this game. Rahrah sometimes comes to check it out. She can fit into the box quite easily.

The Farmers' Curb Market had these beautiful long eggplants that I love. I also bought pink-eye purple hull peas and okra and some little miniature eggplants. Buying the peas caused me to make a recipe of my family's beloved Hot Tomato Relish before I could cook the peas.
I made a little progress on this black and white wall quilt, but it will take one more day (with Elizabeth asleep in another room!) to finish it.
After my disappointment over having no black swallowtail butterflies lay eggs on my HUGE parsley plant this spring/summer, I kidnapped (rescued) four fat caterpillars from Ellen Hall's parsley when she said she had two plants being devoured by a bunch of them. I put them in a large jar with some parsley bought from Winn-Dixie, and after four days I had two chrysalises. The other two did not live. Felder Rushing, our state gardening expert, mentioned that the Eastern Black Swallowtail is Mississippi's state butterfly. This made me even happier to think I saved a couple from the birds. The butterflies should wake and shed their chrysalises in 10-20 days; then live another 6-14 days, hopefully laying eggs on MY parsley! This article and pictures confirmed my identification. I got another caterpillar from Ellen, with less yellow-green and more black, so it might not be a swallowtail. She's munching away on her very own parsley plant, so I'm eager to see what she turns out to be. (Be sure to enlarge pictures to see these better.)

Progress is very slow on the dog puzzle. Elizabeth says this box is too small but will do for now. 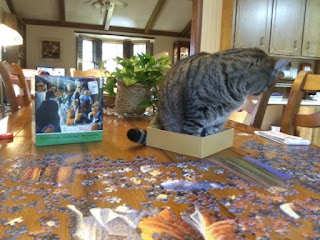 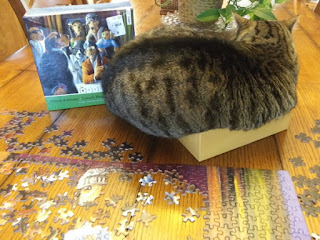 The light went out on my sewing machine and a trip to the service guy would be necessary to replace it.  After seeing a little light strip on Stewie's Nana's machine, I ordered one. (Stewie Fulkerson is a beautiful cat with his own Facebook page.) It was tricky to stick under my Pfaff's machine head, but Elizabeth was there to investigate and help out. 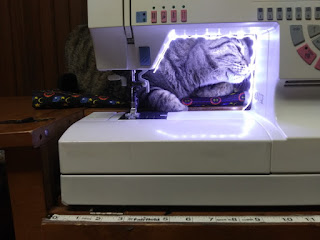 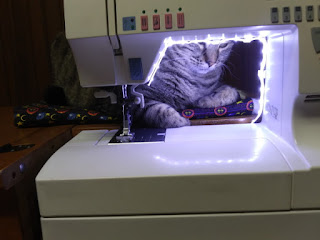 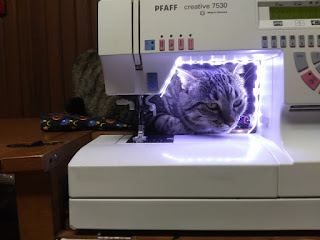 Here is what the strip looks like as I am sticking it to the side and underneath of the machine head.  I ordered mine here: https://serenshop.com/product/sewing-machine-light, cost about $20 including shipping and it took a couple of weeks, was shipped from China. 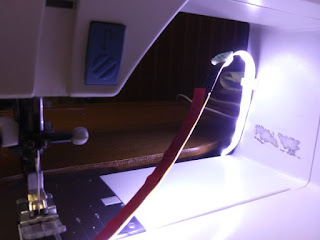 Stewie's Nana says hers came from this site: 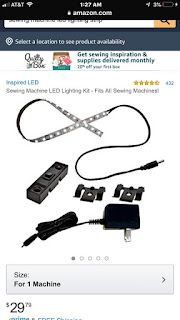 Meanwhile, Tarbaby is perched on the back of my computer chair (with pillowcase to protect from sharp claws). 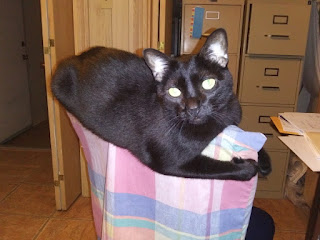 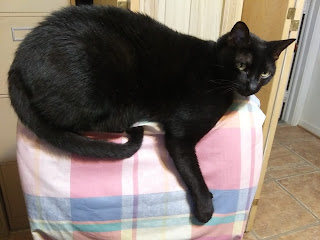 Rahrah always has a guilty look on her face. I think it is those big eyes. 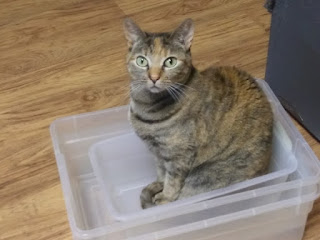 After bragging about my "clean" garage, I feel a little guilty that I did not show the rest of the garage. But not guilty enough to do that. You have to have shelves to store gardening tools and such. An extra old refrigerator is also handy.
I finally got Elizabeth off this Fractured Roses quilt long enough to get the binding and sleeve on it. Then this Improv Music piece is also finished.
I took them to an SFA (Southern Fiber Artists) meeting yesterday. It is always refreshing to spend the day with other fiber artists and see what they have been doing. We presented little 8"x10" quilts to thank Sue Rountree for her two years as our leader. Here is mine--a ghost-quilting piece. 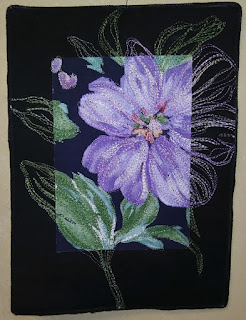 Jackie Watkins and I taught a Moon Over the Mountain Interleave design to the group. 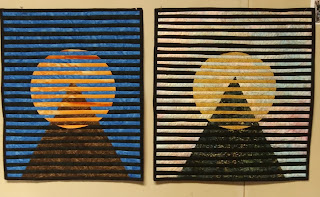 I participated in a quilt exhibit called Sacred Threads last month that is held biennially in the Washington DC/Virginia area. This is a unique exhibit of quilts exploring themes of joy, inspiration, spirituality, healing, grief and peace/brotherhood. There was a section called Eye Contact: Creating a Connection, of small quilts (5" x 23") featuring human eyes, with the purpose of encouraging us to notice each other, to look at each other, to interact with each other, "to bridge the distance that seems to separate us." http://sacredthreadsquilts.com/html/iseeyou.html 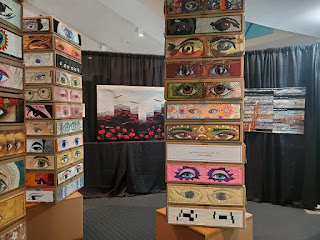 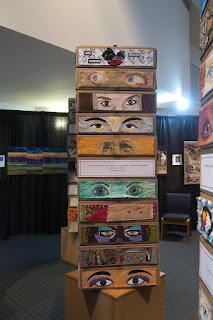 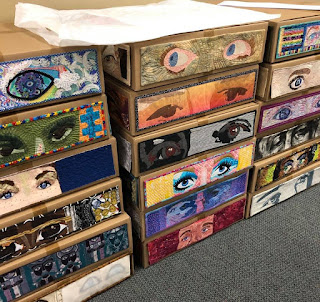 The current puzzle on my table is a picture of those old dogs playing poker. It's 1000 pieces with lots of black or blue-black that will be the last to put in. My favorite is the guy on the far right. 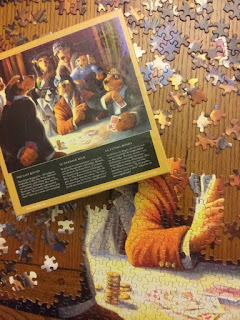