While taking a break from quilting the Mississippi Orange Peel, I finished up several projects. I hope the child I'm giving this to likes frogs in wild colors.


I love making the Interleave Quilts; there are so many possible fabric combinations as well as design choices. Here are a couple, along with a free-motion quilted piece for the Silent Auction at our show. What a great feeling it is to finish up some projects before deadline.

My youngest granddaughter turned 21 this week. Here is one of my favorite pictures taken many years ago in the Texas bluebonnets near her home. 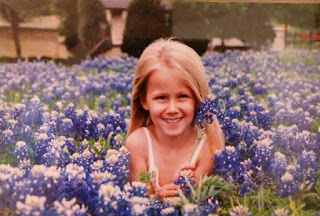 Posted by Martha Ginn at 6:35 PM No comments:

Karen K Stone visited Hattiesburg in November 2016 and presented a program for our Pine Belt Quilters guild and then taught a class on the traditional Orange Peel block, showing her beautiful quilt she calls Indian Orange Peel. Karen's pattern included printed paper foundations, which I then copied onto an interfacing (which can be left in) called Do Sew. This eliminates that tedious step of tearing all that paper foundation out after the blocks are sewn.

Picking and grouping the fabrics for these blocks was a fascinating and fun project, and once I got started, it was like an obsession. The possibilities for spikes and backgrounds were endless. 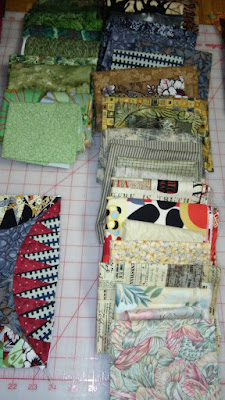 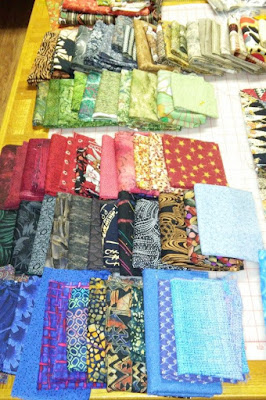 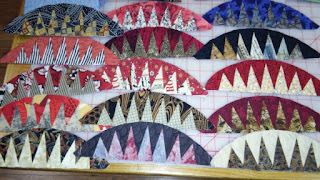 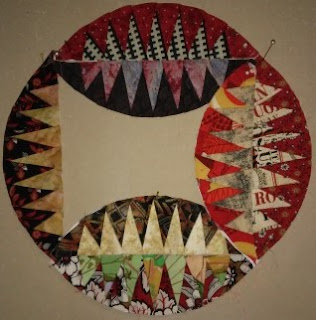 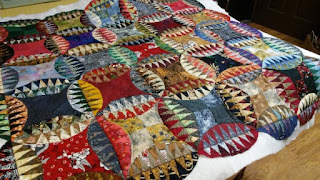 It took a bit to get the hang of sewing the blocks, but with each block the process got easier and faster. I decided on a five by five block arrangement, adding the curved arcs on the outside of all blocks. I did not want the larger border Karen used in her quilt. The project lived on my design wall for quite some time as I chose how I wanted to arrange the blocks, deciding on a diagonal line of basically red blocks from upper left to lower right. So far, so good. I loved looking at it! 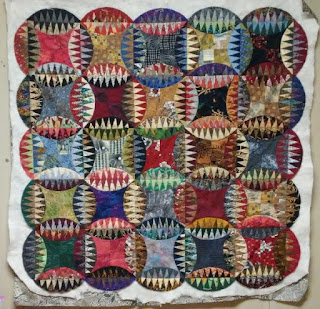 Then life intervened and the project was put aside as I pondered how to quilt it.  I like to quilt my own work and planned to really enjoy the process. I selected a black/white print for the backing. 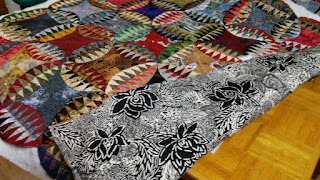 Finally I layered it and began to quilt on my stationary machines--both the Pfaff and the Janome. Ooops! I hit a wall. All those little pieces coming together at intersections and corners of blocks created thick and cumbersome areas that wanted to push and slide under the presser foot. So I tried free-motion quilting. Still having problems with the thickness. But I have begun and will persevere. I love the pieced top too much to abandon the project. I hope to have some progress to show soon.
Posted by Martha Ginn at 5:15 PM No comments: 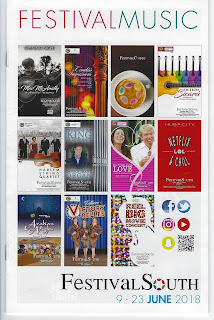 June might be my favorite time of the year in Hattiesburg (in spite of the hot weather). It's because of Festival South, which is in its ninth year.  "The Hattiesburg Concert Association presents Mississippi’s only multi-week, multi-genre festival, offering both free and ticketed events that showcase the area’s rich creative economy. There is something for everyone!" (from their website www.festivalsouth.org)

There are morning concerts M-W-F at coffee shops, afternoon and evening events at churches and auditoriums.

The morning coffee concert at The Depot Kitchen and Market showcased Harlan Mapp, baritone, and Kay Guiles, piano, with popular showtunes. The outdoor setting was beautiful and breezy, although the musicians had to take a timeout every so often to work around the noise of a passing train. 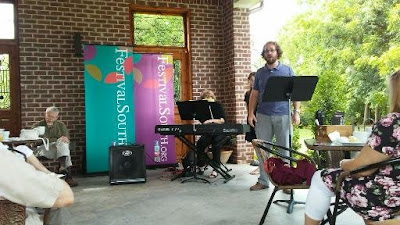 Eight guitarists from Mexico charmed the audience at Hattiesburg Cultural Center. I was sitting so close that I could not get all eight in one photo. A broken string was only a minor distraction for these talented fellows. The maker of the guitars was also present. Ricardo Hernandez Reyes is a student at USM and was responsible for getting this group to perform at Festival South. Ricardo is the fifth from the right in the picture below. 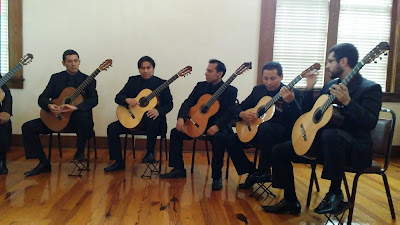 Ricardo is the fourth from the left in the picture below. 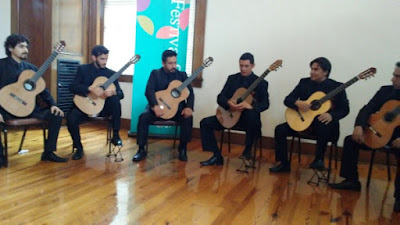 The New York-based Harlem String Quartet was quite a treat to hear at First Presbyterian Church. They played music from Debussy to Dizzy Gillespie. Patrick Scott, Assistant Organist-Choirmaster at the Episcopal Cathedral of Saint Philip in Atlanta, Georgia, played an outstanding concert at Westminster Presbyterian Church. Patrick is a native of Picayune and formerly studied with Kathy Vail on this very organ during his teen years when it was located at First Baptist Church. The organ has been relocated to Westminster Presbyterian Church, and Patrick demonstrated the majesty of this instrument. 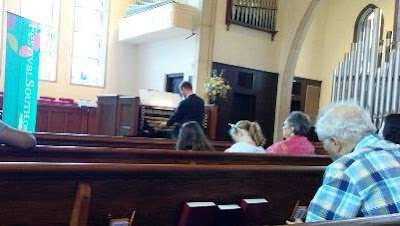 I attended another concert--Timeless Impressions, at Main Street United Methodist Church with flute, clarinet, harp, string quartet but did not get a picture.

Still to come will be the Victory Belles, a singing group from the World War II Museum in New Orleans, celebrating Father's Day and our veterans. 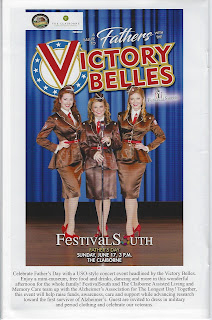 I just finished a quilt for my newest great-grandson, Grayson. A couple of weeks ago I was wondering if I had made that baby his own quilt when his mom posted a picture on FB of him "enjoying the colors on his brother's quilt." Guess that was my answer!
I had some nursery rhyme pictures that were intriguing and I hoped the older brothers (ages seven and five) would enjoy telling baby brother the stories. Then I thought, "Do children hear Mother Goose nursery rhymes today?" I wrote the boys a letter and included several photos of the scenes and asked if they knew these stories and if they would like to tell baby brother about them. This might also help involve them when brother received a gift and they did not. I mailed the letter about a week before I sent the quilt.
(Enlarge to see the pictures better) 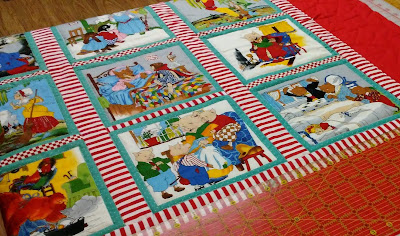 I asked "Who are these characters?" "What are they doing?" 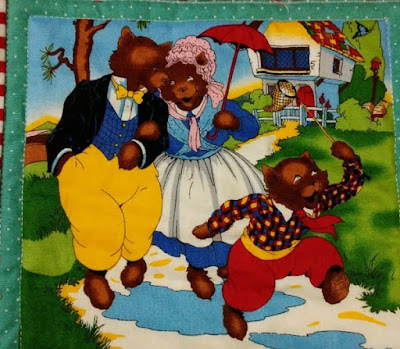 Then I asked, "What is happening here?" 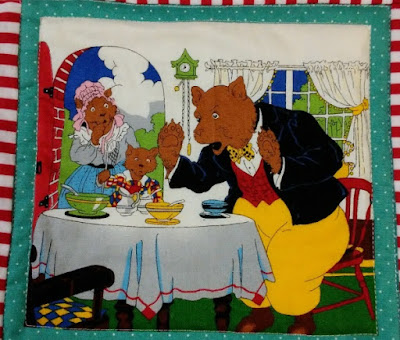 I asked, "Do you know the story of the Three Little Kittens Who Lost Their Mittens?" 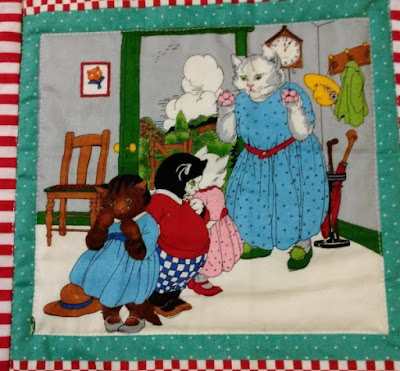 I had to include a picture of Elizabeth slowing my progress. 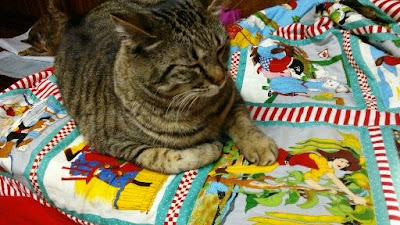 The royal wedding was enjoyable to watch last week, but I couldn't keep from wondering what all those people did for bathrooms. I never heard any mention of how this was handled and kept listening for some reporter to cover this important detail. Then I saw this picture in a Time magazine. Should have known the Brits would have it covered all neat and tidy. 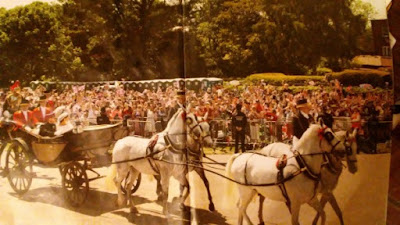 I have pampered and petted my hydrangeas for several years and I think they are finally happy and healthy, with huge blue to purple blooms. Through the winter I worried over those dead-looking stems. Not to worry! 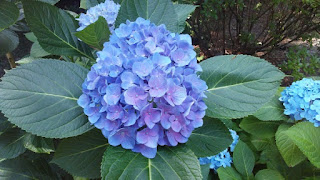 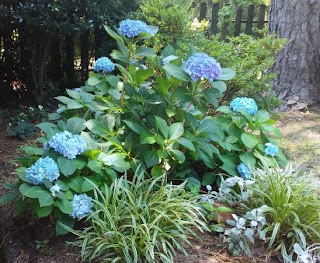 This may not seem like such a big deal to everyone, but successfully changing out my oven heating element made me feel like a genius! It seems anyone can learn anything by watching YouTube videos to see how it is done, then I figured out how to order the part--from Amazon!--and finally got up my nerve to tackle the job. The closest I came to giving up was trying to decide which of these shiny parts was the right one. But I must have lucked out and chosen the right one because now I have both baking and broiling capacity in my oven again. 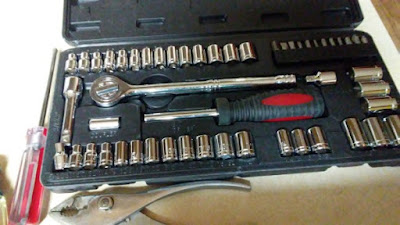 Bonnie Hunter (Quiltville USA) was the guest teacher at the MQA Gathering in Jackson this weekend. She was thrilled to receive a barn quilt sign painted by Rita Hudson Williams. I took Pine Belt Quilters' raffle quilt Mississippi Kaleidoscope to display and sell tickets. 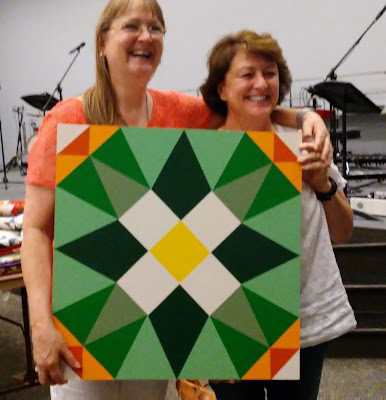 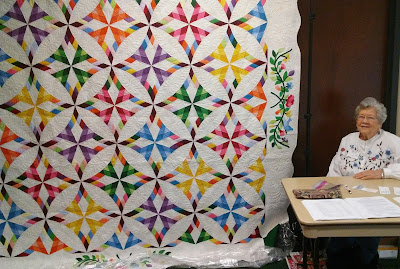