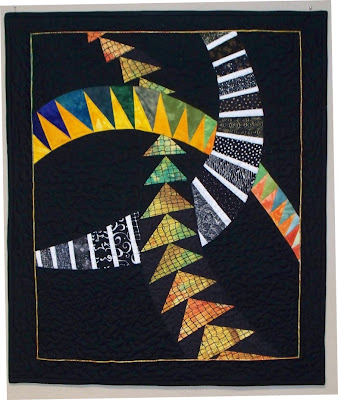 Ribbons 2010
(25" wide x 29" high)
The AIDS Services Coalition held its 2010 Gala Sunday night, October 3 at the Historic Hattiesburg Train Depot. There was lots of good food furnished by local restaurants, silent and live auctions of artwork, merchandise, vacation packages, and other items.
My contribution is pictured above, entitled Ribbons 2010, to fit into the event's theme of Ribbons of Change. The black/white band typifies narrow and close-minded thinking; the flying geese band typifies a gradual lifting of old prejudices and attitudes, while the bright yellow/orange band of triangles illustrates a moving forward with cooperation and hope in the fight against hatred and injustice.
Posted by Martha Ginn at 2:36 PM 2 comments: 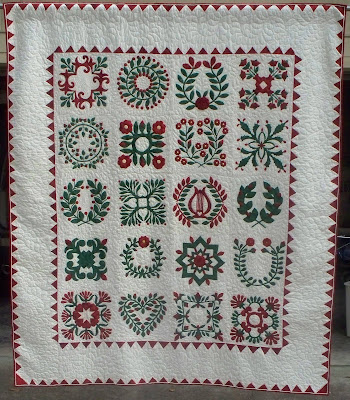 In 2002 I was presented with 18 beautiful applique blocks in the Baltimore Album style. These were made by all the presidents and several other founding members of Mississippi Quilt Association in appreciation for my contributions to the organization from its inception and organization in 1991, through its documentation and publication of the book Mississippi Quilts written by Mary Elizabeth Johnson. At this time I was stepping down from my role as newsletter editor to pursue more of my personal goals and to take care of family health issues.
Over the next eight years, I made two more blocks, assembled the blocks, appliqued a double dogtooth border, and got it ready for quilting. My options did not include hand quilting it myself but I sincerely wanted to complete it on my own. I had recently purchased a Handy Quilter 16 and had done a couple of small quilts on it, which gave me the courage to attempt this big project. Good friends Diann Loper and Susie Jackson, both talented longarm quilters, gave me advice and encouragement, and I began quilting around all the applique elements and adding feather designs in the open spaces. Susie helped me draw an undulating feather design in the border, and I completed the quilting. I added an ecru piping just inside the binding to complete the project. Working on the quilt gave me many happy memories of our early days of MQA and our search project and the lasting friendships that were formed. I am deeply honored by this gift and dedicate it to all the talented Mississippi quilters who have enriched my life.
Below is a listing of the makers of the blocks. Astericks mark the four who have passed away.
Row 1: Martha Skelton* // Barbara Newman //Peggy Randolph //Nancy Welsch

Our Pine Belt Quilters 13th Biennial Fiber Art & Quilt Show was a beautiful event. We displayed nearly 400 quilts and one of the Hoffman Challenge traveling exhibits. We awarded $6,900 in cash prizes plus three sewing machines and three other gifts from merchants. We had 21 vendors with fabric and machines to tempt everyone. Special guest lecturers were Julia Graber, Barbara Cline, and Polly Yoder, three Mennonite sisters who shared their talents and special family stories with us. You can see their individual blogs; they have also created a joint blog, which you can see here.
I presented a lecture called "Lagniappe" at the show, featuring my fiber art which demonstrates my journey from my traditional background into innovative methods and original designs. 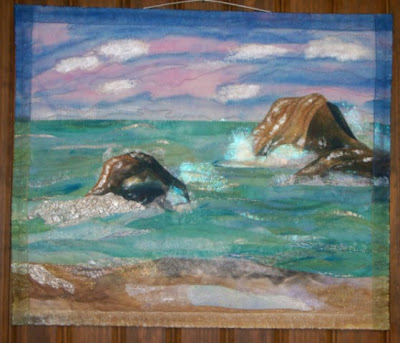 Pacific Coast
I won three blue ribbons and an Honorable Mention. "Pacific Coast" (18 x 15) is pictured above. It features hand painted fabric, Angelina fibers, painted cellophane, and stitching to create the water and beach scene. The edges are finished with organza ribbon. Photographs I took on the Washington and Oregon coastlines several years ago became the inspiration for this piece. 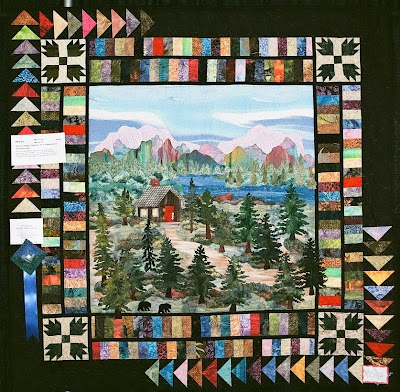 Cabin in the Woods III
Mary Nell Magee and I collaborated on the above piece, "Cabin in the Woods III" (50 x 50). Yes, this is the third cabin piece we have made. The first went to an adoption agency auction in 2002, the second won a blue ribbon in 2003 and hangs on my wall, and this one will be hers. It is primarily made of batiks. 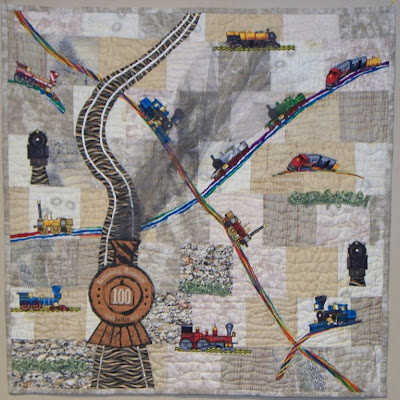 The above piece, "100 Years of Trains," won first place in the Hattiesburg Depot Challenge. Our depot is celebrating 100 years of continuous use as a depot, and our show featured a challenge to commemorate this event. The depot has been remodeled into a beautiful building that is the perfect setting for weddings, receptions, and other special events, as well as still being used as a passenger station. I cut many types of trains from fabric and fused and stitched them onto the pieced background. Gray tulle was used to simulate the smoke. The piece is 24" square. 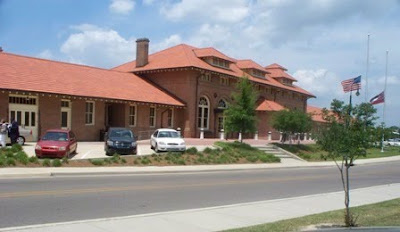 My "Giant Wave" (below, 21" x 17") won an Honorable Mention. It contains many of the same techniques as Pacific Coast that I learned from Linda Schmidt. She is well known for her use of unusual products to achieve a desired effect. 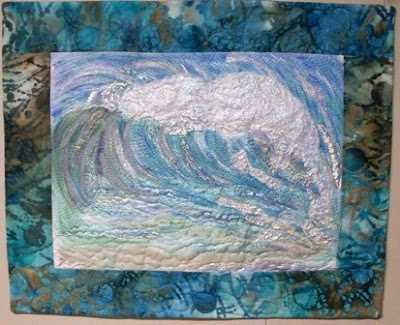 Pictures during the week of the show can be seen in the October 2010 entries on the Pine Belt Quilters Blog.
Posted by Martha Ginn at 8:52 PM No comments: