It's hard to believe I turned 80 yesterday (December 26), given my impression of what 80 looked and acted like up to this point in my life. Perhaps I shouldn't be so surprised at reaching this age, since my parents lived to 89 and 91. I was loved by a wonderful man for 57 years; I have two children who make me proud. My art brings me pleasure and lets me express my love of all things. And music. Shortly before my dad died he said, "oh, what would we do if we didn't have music?" I laugh at this often, especially when hearing an organ at full volume, remembering how his tastes stopped many decibels lower.
I suppose it is natural to be philosophical at milestones such as birthdays and year ends. This statement that my daughter quoted on Facebook recently really caught my attention: “The purpose of life is not to be happy. It is to be useful, to be honorable, to be compassionate, to have it make some difference that you have lived and lived well.”-- Ralph Waldo Emerson
I like that. . . it seems to be a good way to live these next several years. With my cats.

Christmas Decorations with the Cats 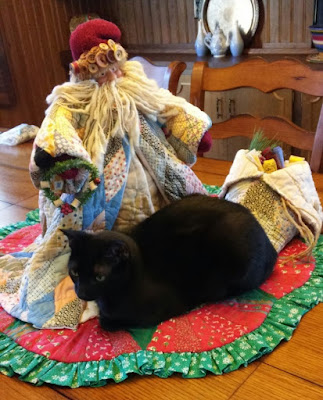 Christmas decorations get more simple each year. My cats thought the Santas were especially for their enjoyment, and I found each one snuggled up on Santa's robe at one time or another. 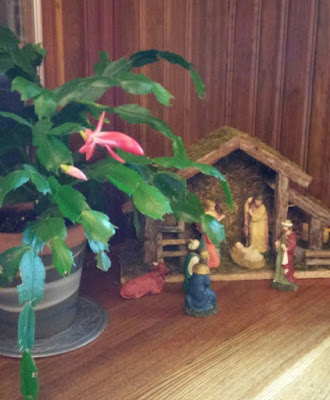 Rah-Rah often visited the nativity set, perhaps because it was on the table by her favorite window. She still is fascinated by the moving objects on the computer screen. 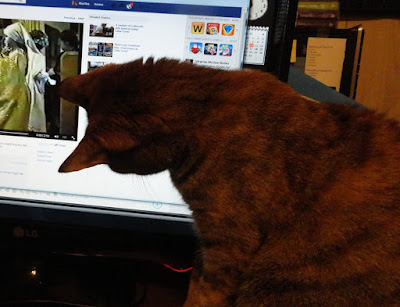 Elizabeth loves to lie on her back with her front legs stretched out, hoping for a tummy rub. 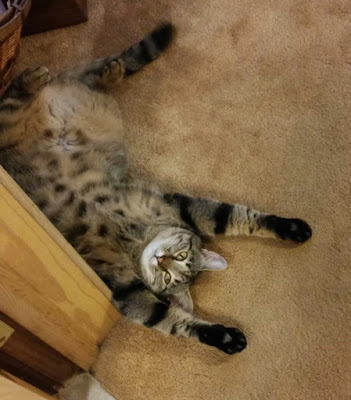 Lest it seems I took a holiday from quilting, here is a child's quilt I made from nine Bingo "cards" our guild made and played with in November. I also made a baby quilt for my next great-grandson Knox Kuykendall (due in January) and one for my great-niece Peyton Rose Woodland. But these were delivered or mailed before I remembered to take pictures. 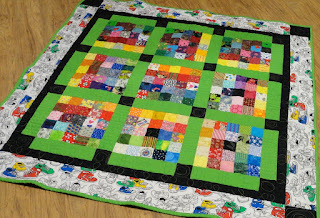 The Bingo blocks were made in five colored rows using different types of fabric. Instead of B-13, N-40 or G-55, the caller said Yellow-floral or Green-paisley or Blue-solid. We paid money into our Children's Quilt fund and will make quite a few quilts from the Bingo "cards" that were made. See Pine Belt Quilters blog for November and December for more Bingo pictures.

It's always affirming to win a ribbon in an art show, especially when competing against several other types of work. Our South Mississippi Art Association's annual show was held this weekend, with 110 pieces entered. My work goes in the "Other" category--meaning not oil, not watercolor, not photography, not drawing, not sculpture, not wood, not pottery, not stained glass. So "Other" contains mixed media, collage, fabric art, digital art, and anything that doesn't fit elsewhere. A second place ribbon is a big win in this stiff competition. A large mixed media collage by Andrea Kostyal won 1st place.

The Mule Barn depicts a section of the Ag Museum in Jackson. Five sections will be stand-alone pieces but can be displayed together to create the entire scene. Five artists are working on the piece, pictured below. My section is second from the left.

Here is an in-progress picture while decisions were being made about how to approach the piece. 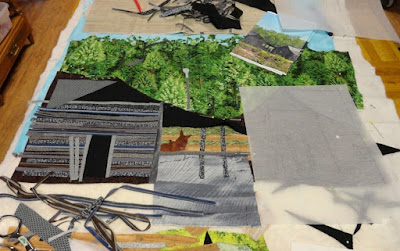 And It's Already December 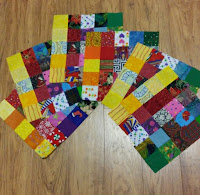 Last month my quilt guild (Pine Belt Quilters) played Bingo using fabric "cards" we made in colored rows, so instead of hearing B12 or G55, we heard calls like Yellow Batik or Blue Floral. I assembled nine "cards" into a children's quilt with screaming chartreuse sashing and black cornerstones with tennis shoes for the border. 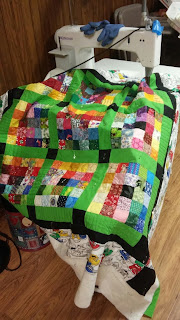 We hosted Susan Cleveland for a workshop, and I finished the project started there. Sometimes the busy-ness of the season makes us forget that we actually got something done. 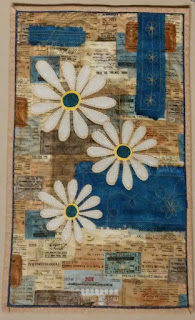 I enjoyed heading up a group from my church in making two new felt cutaway banners to celebrate the blessings of the fall season. They are 96" long and 48" wide and hang beside the baptistery. These are felt over netting, allowing the bricks to show through. The designs are by Fashions by Sarah and are the same type we made last fall for advent. The four advent banners can be seen here. 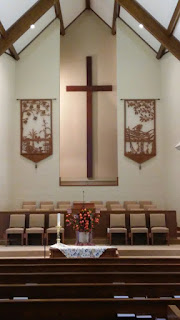 I made a trip to Dallas to visit my son and his family the weekend before Thanksgiving. Brittney, my oldest granddaughter, is expecting a baby boy next month, and there was a shower for her. Lots of pictures. One of my favorites is of the six sisters, with photos standing in for Kelsey (at Oklahoma Baptist University) and Katelyn (married living in Michigan). L to R: Kiesha, Kaley, Brittney, Christy. 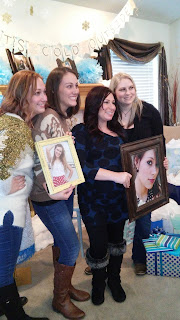 Anyone who reads this blog knows I am a dedicated cat lover, but that little dog in Dallas really won my heart. Meet Willow: 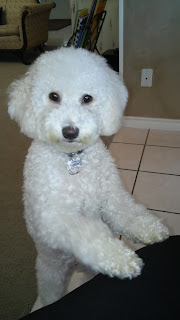 My church, University Baptist in Hattiesburg, recently remodeled the Parlor into an Art Gallery through a generous gift from the family of the late Phyllis Downey, a dear friend and artist. We believe there is a strong connection between Faith and the Arts and will enjoy celebrating creativity here. The first exhibit was acrylics by Myra Meade, followed by exciting children's art they created this summer during their Mission Bible Days. Currently the exhibit is fiber art by Gloria Green and me. The exhibit will hang through December.
Click on any picture to enlarge.

Sorry for the poor quality of this photo. The pieces are Earth, Water, Air, and Fire, and are framed under glass, making it hard to eliminate the glare. Fire is on loan from a private collection.
Posted by Martha Ginn at 12:47 AM 11 comments: 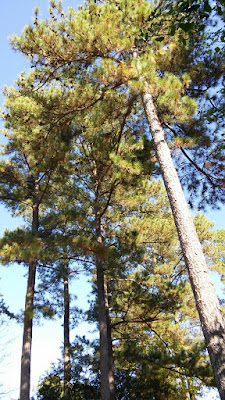 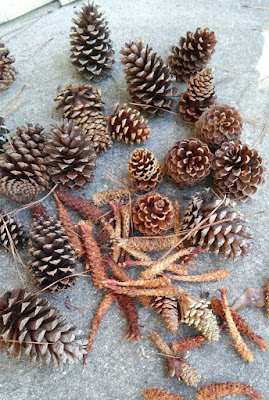 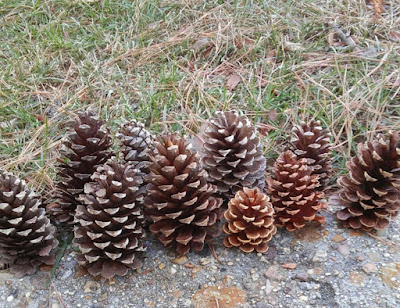 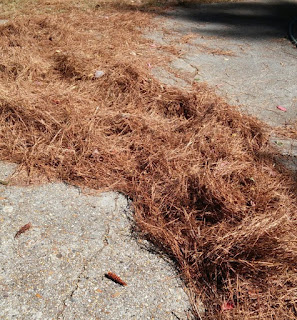 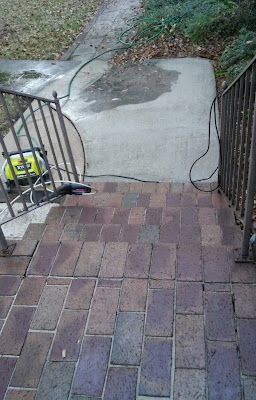 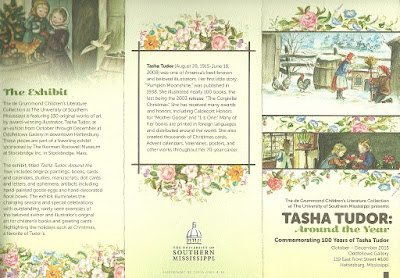 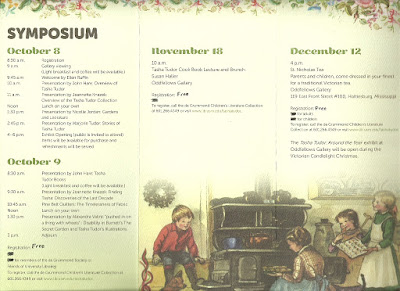 I shipped my Rise and Shine, Inner City quilt to SouthArts back in November 2012 for the exhibit The Sum of Many Parts, composed of 25 quilts by American quilters, organized by the US Embassy in Beijing. I even got to go to Beijing and Dalian for the opening of the exhibit in Dalian in April of 2013. After the exhibit toured six museums in China, Mid-America Arts Alliance picked up and extended the exhibit with 15 of the 25 quilts traveling in the U.S.
My friend Ellen Lindner, an expert quilter in Florida, sent me a photo she took while attending an exhibit at Crealdé School of Art in Winter Park, FL. I had not kept up with its schedule, so it was a happy surprise to see someone enjoying viewing my quilt! The exhibit is open September 2015 through January 19, 2016. I think my quilt is due to return home the end of April 2016.
Posted by Martha Ginn at 8:06 PM No comments:

Every year a group from various parts of Mississippi gathers at Lake Tiak-O'Khata near Louisville, MS, for an informal retreat. Last week was our 20th year to meet, and we have some special friendships among these quilters. We have lost some, grieved over losses, celebrated good news and grandbabies, and done lots of stitching in the three days we stay there. One of our group prepared a 10-minute CD of memories from previous years, with a copy for each of us--a real treasure.

Some of our Show & Tell is the finished product of what we watched being stitched over many years. It is always refreshing to get with good friends and talk (and do) quilting.

We bring some of our food but also enjoy the sumptuous buffet meals at the restaurant. They make awesome homemade pies and the coffee keeps coming. 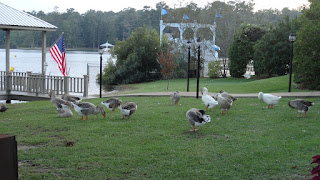 At the Greater Jackson Quilt Celebration

Five guilds in central Mississippi hosted the Greater Jackson Quilt Celebration September 11-13, 2015 at the Mississippi Craft Center in Ridgeland. I was proud to have three entries there, and especially delighted to receive "Best Quilt By An Individual" award. 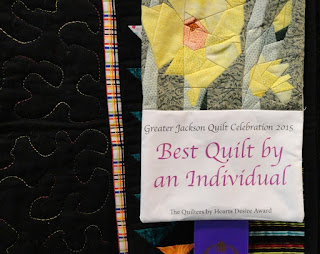 Foster Kitten Update:  I have been taking care of four little orange tabbies for Southern Pines Animal Shelter. for several weeks. Tiger was adopted last weekend. He's the darker orange with the short tail, one week older than the K brothers. Kaiser, Ken, and Keller had their snip surgery this week and went to PetSmart today for someone to fall in love with.

I will miss the little furballs, but it will be nice to move my car back into the garage.

Labels: Jackson Area Quilt Celebration, Mississippi Craft Center, Southern Pines Animal Shelter
Newer Posts Older Posts Home
Subscribe to: Posts (Atom)
Welcome! Thanks for reading. I love to hear from you, so feel free to leave a comment. If you sign up to follow by email (below), you will be notified of new posts. I promise not to bother you otherwise!