As if having my quilt selected as part of The Sum of Many Parts: 25 Quiltmakers in 21st-Century America were not enough excitement and honor, I have just received copies of the exhibit catalog, with my "Rise and Shine, Inner City" pictured on the cover. The exhibit opened in September 2012 in Shanghai and will travel to four other museums or galleries in the next few months of 2013.
The exhibit is a program conceived and sponsored by the United States Embassy-Beijing. The exhibition and its tour throughout the People’s Republic of China has been jointly developed and managed by ArtsMidwest and South Arts, with additional assistance from the Great Lakes Quilting Center at Michigan State University.
The exhibition will tour to five venues throughout China, beginning September 7, 2012:
Links have been set up with more information and pictures of all the quilts:
·         http://www.southarts.org/site/c.guIYLaMRJxE/b.8271263/k.62F9/The_Sum_of_Many_Parts.htm
·         http://www.southarts.org/site/c.guIYLaMRJxE/b.8273279/k.90FD/About_the_Exhibit.htm
·         http://www.flickr.com/photos/artsmidwest/sets/72157630842024574/
·         http://www.artsmidwest.org/programs/sum-of-many-parts-quilt-exhibition
Posted by Martha Ginn at 8:33 PM 5 comments:

What Makes a Merry Christmas?

Does Christmas have to be filled with shopping, decorating, and rushing to qualify for a Merry Christmas? Definitely not, though we often have to remind ourselves of this. It is wonderful to get to be with family at Christmas, but we can choose to be happy and joyful and celebrate the real spirit of Christmas in a crowd or alone. 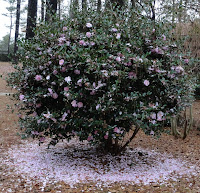 This is not a Christmas tree, but it's what I've been enjoying lately. Sasanquas are kin to camellias but bloom earlier. This one is covered in soft pink blooms that then begin to make a carpet of pink as the blossoms fall.


It's been a very joyful though untraditional Christmas.  I say "untraditional" meaning there were no excited children opening presents, no big gathering of family, no good cooking smells from the kitchen or stacks of dishes. There have been several parties or luncheons with friends, lots of beautiful Christmas music to sing, and I got to hear/see a live performance of "Amahl  and the Night Visitors"--something I wish for every year.

I did not shop or get rushed over decorating. Advent at my church is always a time of thoughtful preparation for celebration of the Christ Child, the real meaning of Christmas. I like to display several nativity sets, and these add to the joy of the season.

As far as quilting activities go, my personal projects were put on hold in order to take part in gatherings of friends and making gifts for our guild to share. We make children's quilts all year long and then donate them in July and December to hospitals, shelters, and other agencies. We also make walker totes and catheter bag covers for hospitals. It is amazing what enjoyment can be gained from spending some time on projects like these that you know will bring joy. See Pine Belt Quilters blog.
It was a very Merry Christmas!
Posted by Martha Ginn at 11:26 PM 2 comments: