After several weeks of preparation, my guild's 16th show took place on October 7-8-9, 2016. We hung 250 quilts plus a Hoffman traveling exhibit, held hour-long lectures on all three days, gave door prizes, shopped at 16 vendors, silent auctioned about 30 small quilts, drew for our Autumn Splendor raffle quilt, had quilt appraisals . . . and thoroughly entertained our visitors to the show. Any time you don't lose or damage a quilt, you count it as a successful show! Those of you who have been involved in the behind-the-scenes workings of a quilt show can fully appreciate this statement. As show chair, I was extremely proud of our members who worked so hard and willingly to create this unique event.

On a personal note, it was exciting to win my first Best of Show-Small for a friendship quilt made with four others: Marcus Weekley, Cathy Reininger, Julia Graber, and Rita Warnock. (Our show awards two Best of Show awards--a Large and a Small.) I have shown the five sections in this earlier post. We were pleased at how the finished piece looked when the five sections were presented together. The award was a Nechi EX100 machine, and we thought of King Solomon's wisdom in what to do with one award to share among the five of us. We plan to sell it and split the proceeds.
VisitHattiesburg has sponsored a purchase award for our last five shows, with this show's theme commemorating Curious George's 75th anniversary and the de Grummond Children's Literature Collection at USM's 50th anniversary. The theme was "Curious George Visits de Grummond," and my quilt was titled "Curious George Reads Ezra Jack Keats" (with scenes from The Snowy Day). I was especially honored to have my quilt selected for this award since I am a supporter of the de Grummond and my daughter is a catalog librarian at USM. 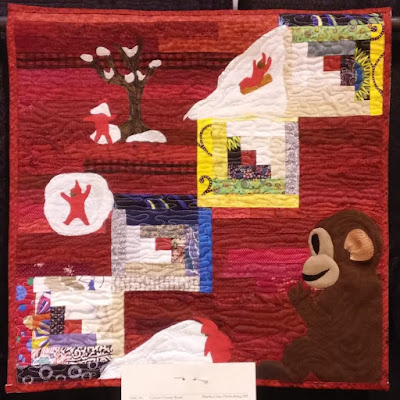 My Round Robin Pathways won a third place ribbon; it is amazing me with its third award in the three shows it has appeared in. Since it "grew like Topsy" by being designed in six stages with each round being a surprise, it seems appropriate that it continues its adventures.