Usually nothing about quilting or creating art is quick! When my local art association (South Mississippi Art Association) in Hattiesburg announced plans for a Quick Draw at Brewsky's to benefit South Mississippi Children's Center, it sounded like a fun activity. 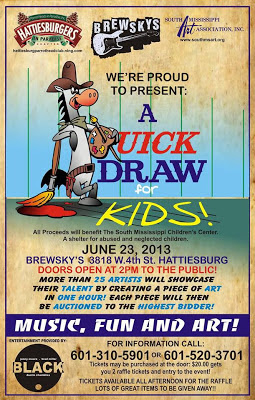 The plan was this: artists would bring their supplies (in my case, sewing machine, table, threads, etc.)—and set up at the venue, where they would have one hour to create their piece, and 15 minutes to frame it. Then the pieces would all be sold through a live auction. A very loud and lively band was playing while patrons were enjoying hors d’oeuvres and drinks and circulating among the artists to watch the pieces take shape.
Being the only one of the 25 participating artists with a sewing machine makes my station a must-see, so this is quite fun! This is the fourth year I have participated, and I have done landscapes, ghost quilting, and this year did thread-painting on a large floral print, adding polyester and rayon threads to enhance the design. I had lightly adhered the print to a stabilizer with a glue-stick on the edges. The fabric I chose had two major flowers in orange and pink, so my thread choices were fairly limited to shades of these plus a green stem. My frame was 11x14 with a white mat, and I knew batting would make it too thick to pop into the frame. That meant the stabilizer was essential for keeping the work flat. 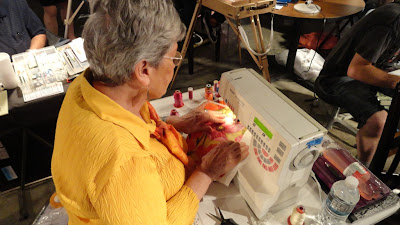 There were many positive comments, even this one: “I love your work, and can you fix my favorite pair of jeans?”
Posted by Martha Ginn at 3:05 PM 7 comments:

Mississippi Quilt Association has a Workshop Gathering in the Jackson area every June. This year's meeting was held at Christ United Methodist Church on Old Canton Road. During the Friday night meeting I presented a PowerPoint presentation on my recent trip to China for the Dalian opening of the exhibit The Sum of Many Parts: 25 Quiltmakers in 21st-Century America. I showed about 100 pictures of the exhibit, the lectures, Chinese buildings and architecture, and the happy faces of the Chinese people who welcomed me so warmly. Hosted by the Embassy of the United States in Beijing, the meetings were a successful interaction of our cultures. I enjoyed teaching a class on the Ghost Quilting technique and introducing the students to Neocolor II crayons as they learned free-motion quilting to extend the center design out into the border. Everyone took to the method quickly and got most of their square colored and stitched, ready to finish at home.﻿ 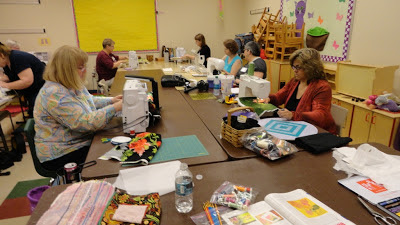 Ollie Jean Lane taught "back-basting applique," a technique introduced by Jeana Kimball, which most quilters in Hattiesburg have adopted as their favorite method for applique. She showed a recently completed quilt top by Ella Lucas as an example of the outstanding results achieved with  this method.

The students were interested in the neat look of the back. It is possible to get the pieces exactly where they need to be with no slipping or shifting.
The next Gathering will be in Corinth, MS, October 4-5, 2013. Jean Tincher from Bay St. Louis was in charge of the meeting as she began her year as MQA president. She had assistance from all the Jackson area guilds, and door prizes were furnished by members from all over the state. The presence of four vendors was a treat for many quilters who do not have a local quilt shop.