After days of storm and hurricane tracking, worrying, preparing and then being bypassed without even a few drops of rain on our dry ground, I find myself trying to be thankful that my life and home were not damaged. Seeing news reports of 200,000 deaths, tragic fires in the West, and more uncivilized treatment of each other, topped off by the death of the champion of rights for all, the Notorious RBG, I am searching for positive thoughts. What a great loss to our country. 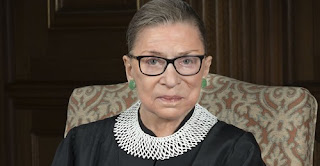 Okay, something good to report--Mississippi's flag, the last state flag to bear the Confederate battle emblem, has been retired by act of the legislature and a new design has been chosen which will be up for vote in November. A nine-member commission settled on "The New Magnolia" flag from hundreds of submissions. 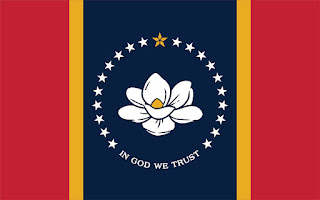 This weekend the Hattiesburg Arts Council celebrated its 50th anniversary by displaying all the works in its permanent collection along with historical scrapbooks showing activities through these years. Pine Belt Quilters had a beautiful crazy quilt in this display, with this interesting history: In about 1995 Jane Heidelberg and other members of the Pine Burr Sewing Club began making a velveteen crazy quilt. After making some squares and cutting patches for the other 12 squares, they saw this was more of an undertaking than they wanted to finish. The materials were offered to Ella Lucas and other members of Pine Belt Quilters. Over the next couple of years, quilters who loved embroidery and hand embellishment finished the blocks and assembled them into a quilt. The end result was an example of fine neddlework and  embroidery that was unique, as crazy quilts were rarely made after the turn of the century. We felt that it should be donated to a museum or organization for preservation as part of Hattiesburg's history. Patty Hall, executive director of the Hattiesburg Arts Council was happy to receive the quilt when it was finished in 1997, and it remains a part of HAC's permanent collection. 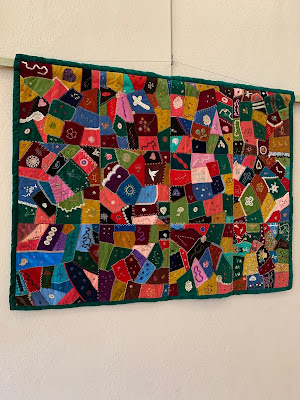 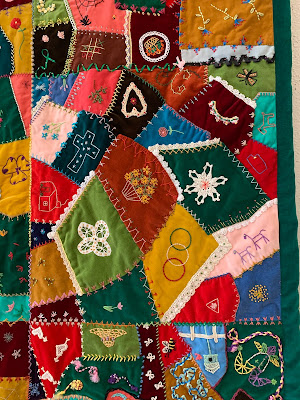 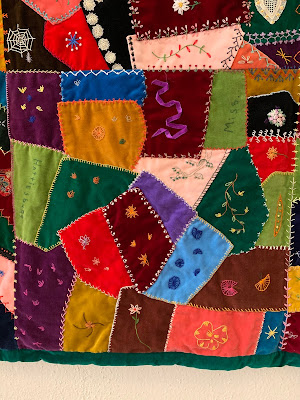 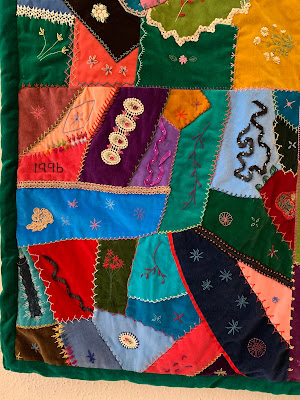 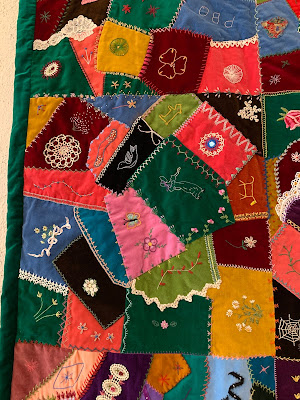 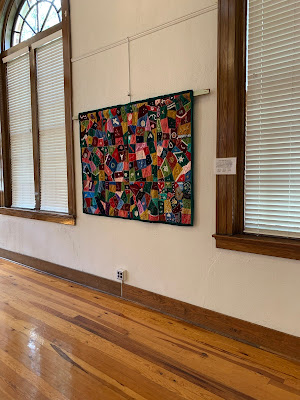 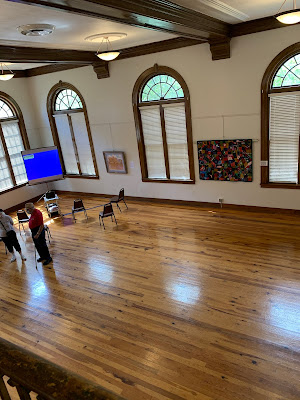 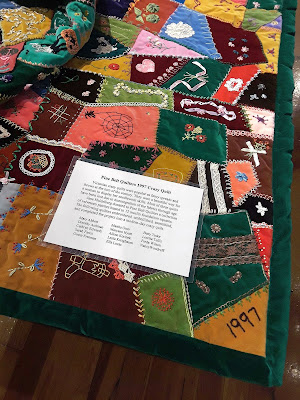 Another 9/11 has come and gone

We never forget where we were when major events happen--some of them good, some we wish we could forget. We can choose to celebrate the ones that bring joy. I'll make it simple by just dealing with positives from the past week.

My kitchen remodeling project that started a month ago was finished. We removed the shelf-like extension, wrought iron post, and drop-down shelf, replacing with a much wider counter.  Corbels were needed (I learned a new word!) to support the wider counter, and I wanted a wooden post under the hanging cabinet. I had to select these, order and stain them and get the installer back.

Another neat happening was The Great Wisconsin Quilt Show Virtual Experience 2020. What a treat to get to "attend" and enjoy a big quilt show without all the crowds and aching feet and knees! After the two quilts came back from this show I am hanging Interleave Symphony for a while. 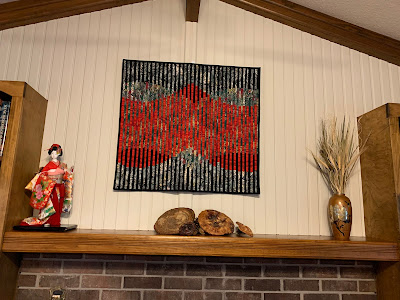 It is time to work on my section of the Italian hillside piece that three of us are making. I am doing the left third of this photo. Rita Warnock and Cathy Reininger are the other participants, and they have finished theirs.  Quoting Wikipedia: The Cinque Terre, five towns, is a string of five fishing villages perched high on the Italian Riviera in the region Liguria, which until recently were linked only by mule tracks and accessible only by rail or water.

It's September, and I Have Turtle Visitors

It was exciting to open my local Pine Belt News yesterday afternoon and see this article by Jamie Massengale. This virtual quilt show can be seen online September 10-12 at http://www.quiltshow.com.

I love finding turtles in my yard. Yesterday this fellow was in my garage. Elizabeth had been in this same place most of the afternoon and perhaps the turtle had been the attraction. He was not there the next time I looked. Then as I walked up my long driveway to put a letter in the mailbox I saw a slightly smaller turtle in an area where I had been putting kitchen scraps for compost. In the couple of minutes it took to come back down the driveway, he was gone. I'd love to have seen this quick get-away. Linda helped me identify them as a Mississippi Mud Turtle and Eastern Box Turtle. I hope they stay close by.

Reporting on my zinnias--they are still growing taller but have no blooms. They are hip high.  The coleus is thriving, and one of the peppers is turning red. 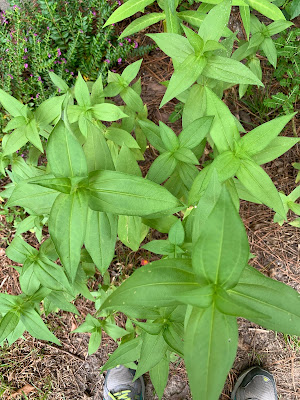 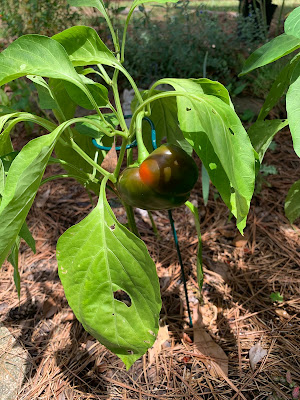 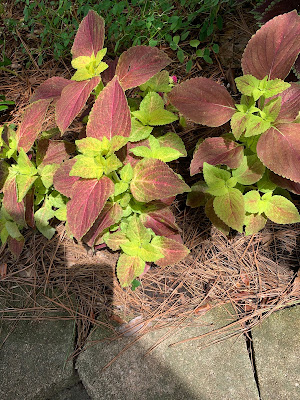 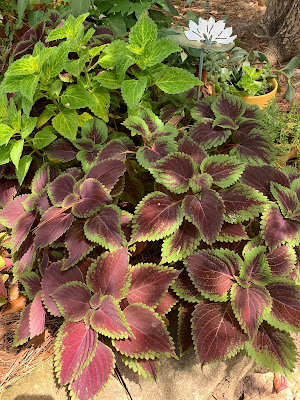