Keeping the flowers and veggies watered is an everyday task, but pleasant. Even though the temperature might have been in the high 90s, late in the afternoons my backyard is shady and it is just delightful to give the plants a drink as I reminisce about seeing my mom do this.
A quilting friend and I enjoyed a couple of days at the MQA Gathering in Jackson this past weekend. The organization formed in 1991, and it was great to see many special friends I would not have known except for MQA. We went early to eat lunch and enjoy some Friday music by Zach Lovett and Dylan Lovett (of the Young Valley band) in the courtyard at the Museum of Art. It was delightful. We have two new museums--Museum of Mississippi History and Civil Rights Museum--that have been getting great reviews. A trip to spend a couple of days there is in my summer plans.
I attended Karen Arzamendi's improv/strip-piecing class. This is a style of quilting I love anyway, and it was inspiring to see Karen's works. Here is an example of what some of the class did. This no-rules approach results in a lot of variety. 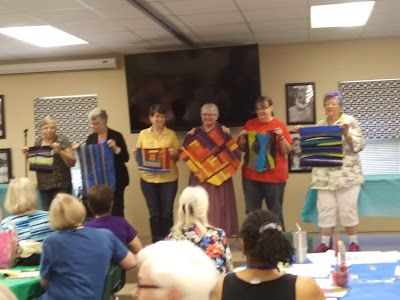 I have been finishing up a few projects, when I can get my fur babies out of the way. This black/white/red piece is using Marilyn Rose's echo technique and has been in a closet for a while. A piece of fabric is cut and rejoined in slices horizontally and vertically, which shows up as sort of an echo effect. Elizabeth likes it. Then Tarbaby was wanting my attention, so he decided to lie down and cover up as much of it as he could. 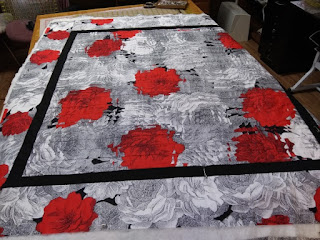 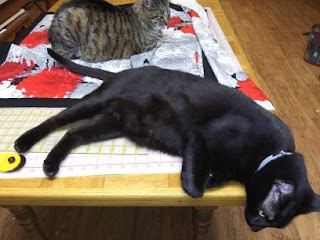 The large red flowers have found their way into other quilts. I don't want to run out of this unusual fabric. 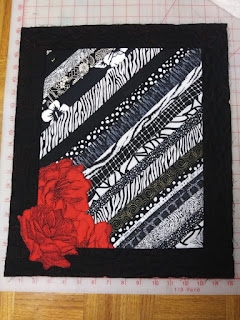 Rahrah wasn't willing to fight for attention and found a folded up square just the right size for her to sit on. 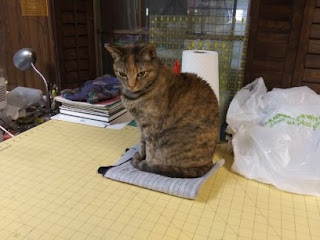 I have one scrawny blueberry bush that makes enough for me to have a snack every few days as I walk to the mailbox. The mockingbirds enjoy them, too, so I have to watch for the ripe ones. 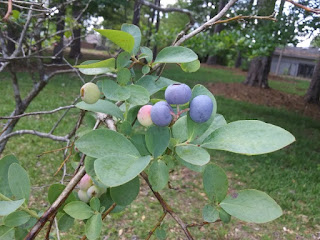 I had what I call a successful grocery shopping trip--did not require a single plastic bag. My mesh ones are working fine. 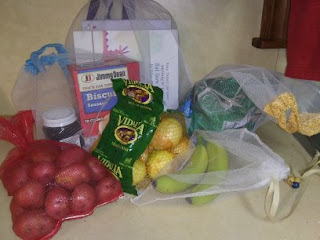 I love the kitties on a quilt! That rose fabric is amazing. I bet the improvisational quilting class was so fun. As always I enjoyed the photos and your stories :-)